The Boston Globe looks at racial diversity in genre fiction.

Or rather, the lack thereof. Interesting article.
posted by clindsay at 11:04 AM 1 comment: links to this post

Email ThisBlogThis!Share to TwitterShare to FacebookShare to Pinterest
tags: sff 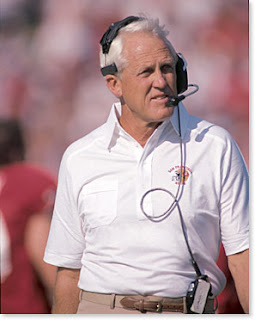 No, I'm not a football fan, nor am I any kind of sports fan. But I grew up in a house where football was king, and Bill Walsh was a god to my father and brother. I note his passing here because I am still a San Franciscan in many ways, and Bill Walsh is a large part of my Bay Area history. Walsh turned the 49ers into a football team that everyone in Northern California could be proud of, even if - like me - some of them didn't quite understand what the hell a first or fourth down was. In the years immediately following the Jonestown massacre (most of the 900+ victims came from the San Francisco Bay Area, where the cult originated), the murders of Harvey Milk and George Moscone, and the subsequent White Night Riots that occurred immediately afterward, the people of San Francisco especially needed something to feel good about. Bill Walsh gave them that.

Jerome Weeks over at Book/Daddy posted an extremely thoughtful essay in response to Gail Pool's new book Faint Praise: The Plight of Book Reviewing in America. Go read it!
posted by clindsay at 9:22 PM No comments: links to this post

Prism Comics co-founder Charles "Zan" Christensen has the scoop on the GLBT presence at this past weekend's San Diego Comic-Con International. (For those of you who may be unfamiliar with them, Prism Comics is a great non-profit organization that exists to promote the queer community within the comics biz.)

Check out his Comic-Con diaries:
Also, in the world of homo comics news, a hearty congratulations to the extraordinary Alison Bechdel, who took home the coveted Eisner Award this past weekend for Best Reality-Based Work for her wonderful graphic novel Fun Home: A Family Tragicomic. Check out Alison's blog for more Comic-Con stories!
posted by clindsay at 8:27 PM No comments: links to this post

But does she use the litterbox?

There are a few animals that veterinarians recommend you don't keep as house pets. I'm pretty sure that "hippopotamus" falls into this category. Meet Jessica the Hippo. Not only does she weigh as much as a small Japanese car, but the folks who keep her actually get her wired on caffeine twice a day. (This does not seem like the brightest idea to me, but then again, I've never kept a hippo as a house pet before.) It's totally worth watching all the way to the end, though, just to see her curled up in her pretty pink blankie, snoozing away with her pal the bull terrier. So cute! (via bear)

posted by clindsay at 6:07 PM No comments: links to this post

The Sunday morning "This apartment is a friggin' mess and I am under-caffeinated" book review link dump.

I am now officially out of coffee beans. I can see the white at the bottom of the bag. Horrors! Indeed, this is something to despair about. Nevertheless, I bravely muddle on. (Possibly because I know I can walk over to Dunkin' Donuts again if need be.) I must have caffeine because this apartment is a disaster and needs a thorough scrubbing. Also, there is laundry to do. (Always laundry. Sigh.) I can't be caught napping in the middle of laundry.

Meanwhile, despite my own personal bean-less tragedy, I leave you with the following good things to read about books:

At the Los Angeles Times, Regina Marler also discusses The Cleft; and Sonja Bolle talks about the effect that Harry Potter has had on reading, and whether Harry made reading fantasy hip. (Um, okay.)

At the New York Times, David Itzkoff takes on Austin Grossman's Soon I Will Be Invincible.

At the Independent (UK), Tim Martin reviews Brasyl by Ian McDonald, and Christian House discusses The End of Mr. Y by Scarlett Thomas.

At Newsday, John Freeman reviews Fforde's First Among Sequels and Three Bags Full by Leonie Swann (which you absolutely must read).

Book Fetish reviews John Scalzi's The Last Colony and gives it four stars (and if you aren't regularly reading this online review 'zine, you're missing out).

Somehow I missed this but January Magazine now has a blog. (Yay!)

And last but far from least, Fantasy Book Critic has a wonderful round-up of new genre titles for August.

This bit is freakishly accurate:

Friends are what life is about to ENFPs, more so even than the other NFs. . . ENFPs are energized by being around people. Some have real difficulty being alone, especially on a regular basis. (TypeLogic)

And the strengths and weaknesses listed here for an ENFP are even more scary-accurate.

It's clear, then. I'm doomed.
posted by clindsay at 1:11 AM No comments: links to this post