The foxes return to Brigantine! 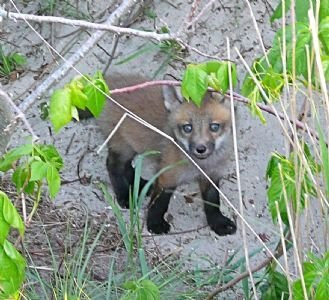 When I was a kid, I lived on a small island in New Jersey called Brigantine, just off the northern tip of Atlantic City. When I say little, I mean really little: most of the island was a wildlife preserve and part of it was just shifting sand dunes which were too unstable to build upon. The entire island was less than ten miles long and - at its widest point - less than a mile wide. The inhabitable part of the island was less than three miles long. When I lived there, the total population was probably less than 3,000 people; in the summer, when we were regularly invaded by the Québécois, that number could swell to as many as 10,000 people. (Picture the town of Amity from the movie Jaws, and you'll get a pretty good idea of what it was like in the summer, cranky sharks and zinc-oxided noses and dopey mayor included. Except that all of our little grocery stores and restaurants and surfboard rental shacks had signs posted in both English and French.)

When I was about eight or nine years old, I found a red fox by the side of the road while I was walking to school. It had been hit by a car and was dying. At the time, it was thought to be one of the last red foxes left on the island. That was over thirty-five years ago.

It was widely assumed that the red foxes were extinct on the island. Until now. My mom sent me these photographs, taken in June of this year: a family of red foxes alive and apparently thriving on the little island of Brigantine. The most amazing thing about this is that they would have had to cross the bridge from Atlantic City to get to the island. Incredible!

Anyway, I think this was the best news I've had in months. Check out these cuties! These pictures were taken very close to where I found the fox that had been hit by a car so many years before. (Hopefully these little guys will stay out of the road.) 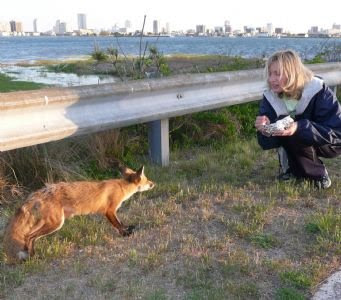 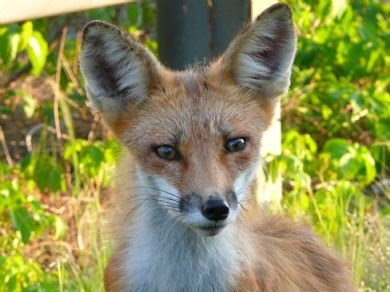 There are coyotes in San Francisco's Presidio. One was trapped, radio-collared and had a blood sample taken. It was thought that the blood would match the Peninsula population but it turned out to match with the Marin Headlands pop. So they must cross the Golden Gate Bridge.

This is very neat to hear. I used to live in Smithville in Galloway Township, but would go into Brigantine a bunch on the weekends. That bridge over is SCARY. Anyways, yay! Foxes! :)

Now THOSE are some cute and crafty foxes. BRAVO!

Ranger Ted, I thought YOU were a cute and crafty fox! ;-)