Sir Arthur C. Clarke, may you rest in peace. 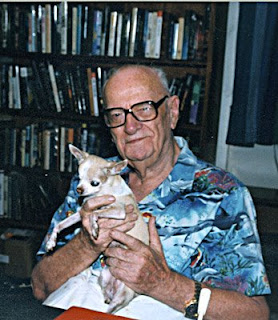 Truly heartbroken over this.

When I began working at Del Rey Books, I remember being absolutely stunned that I had now become the publicist for two of my childhood idols: Ray Bradbury and Arthur C. Clarke.

As a child, in second and third grade, I used to sneak their books home under my school uniform, stolen out of the library of St. Phillip the Apostle School. We were only allowed to read books that were deemed appropriate for our age level, but by the second grade I was reading on a high-school senior level and the paucity of books available for second graders frustrated me. Until I learned that I could climb just high enough to reach the eighth graders' books. At least, I could reach as high as the science fiction shelf. Asimov. Bradbury. Clarke. It was an interesting way to learn the alphabet. I'd tuck a few under my blouse, take them home, read them, and then return them. I don't know that any of the nuns ever caught on.

I still laugh when I remember Ellie Lang's instructions to me when I took over for her at Del Rey: "Remember, Colleen. It's always 'Sir Arthur' when you talk to him."

Although I only ever spoke with Sir Arthur once by telephone, we began a fairly frequent email correspondence, one in which he regularly regaled my publicity department with tales of the late great Pepsi, his one-eyed Chihuahua. I remember also thinking what a tough old bastard he must have been to insist on continuing to scuba-dive even after being confined to a wheelchair with post-polio syndrome.

Late on the morning of September 11, 2001 - just after the second tower had collapsed and all the phones had already stopped working - the very first communication we received at the office was an email from Sir Arthur, asking if everyone at Del Rey was okay, sending his best wishes and, in typical Sir Arthur fashion, quoting Winston Churchill's famous speech:

Never, never, in nothing great or small, large or petty, never give in except to convictions of honour and good sense. Never yield to force; never yield to the apparently overwhelming might of the enemy.

Somewhere I think I still have the print-out of that email.

Ad astra, Sir Arthur. It was an honor working with you.
posted by Unknown at 1:55 AM

Truly sad news. When I heard the news, on my way to office this morning I couldn't believe it. I will most definitely attend the funeral. Let's pay our last tribute to the great scientist, who changed the way we communicate.

So much sadness today. Anthony Minghella (screenwriter of several films) died as well. :(

But I am awed by your connection and relationship with Sir Arthur. Undoubtedly, he will be missed by many.

I think I heard the news before any of my friends. I just pulled up MSNBC, and there it was. Clarke dead. I'd just been thinking about him a few days ago, hoping he was working on another book. The Last Theorem. Indeed.

This is just about as much of a punch in the gut for me as losing Isaac Asimov. By nature, I'm far more an SF fan than a Fantasy one, and Asimov and Clarke especially got me through some tough times. When you're in high school and miserable, you need someone to tell you that there's more to the universe than drama and assholes and making straight A's. Sir Arthur was a big reason I made it through that period in one piece.

Rest in peace Sir Arthur C. Clarke. I hope you'll meet Robert Jordan in a world far better than this one. And I hope that they will contribue to heaven with new books (Umberto Eco belives that heaven is a huge library).

That's a great story about Clarke.
He may be gone, but legends never die.

Wow, that was an unparalleled honor! So sad at his passing, but in a way he is immortal.

It's hard to lose the greats. Condolences on the loss of a friend!

How fortunate you were to have worked with him! Going to start rereading his works now....

I was shocked and saddened to read this news yesterday.

Thank you for sharing your memories.

I'll miss him. He's one of my "great three" of awesome-ness -- Asimov, and Carl Sagan being the other two. With all three, their non-SF had the most impact with me, and I'm yet to read any of Arthur's SF. I'll have to correct that.

Damn, I was miffed yesterday! :(

My big three was Asimov, Bradbury and Clarke.

Last year when the Futures by Nature anthology came out with my story in it, I think the most amazing thing for me was finding out I had a story in the same anthology as Arthur C. Clarke.

(And Moorcock, Pohl and a bunch of other giants.)

I taught a class called English Science Fiction back in the late seventies and one of the texts I put forth for required reading was Childhood's End. It never failed to raise discussions and projects about the human mind and our hopes for the future. Arthur C Clarke could show us the unbelievable and make us believe.
How fortunate you were to have known him.

That's a wonderful way to remember him. Thanks for sharing that.

Thanks for sharing your connection to this great man. I have admired him for ages. We are all lucky to have known him through his writings.
Condolences.