On my nightstand at the moment: 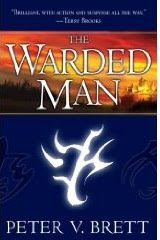 Well, not actually on my nightstand, as Stinkyboy tends to shred anything paper that I leave unattended. Let's say that these are stacked atop a teetering stack of books and papers in a place so inaccessible that even Stinkyboy cannot reach it.

The Warded Man by Peter V. Brett (forthcoming, March 2009): How can you not love this story? A man, bored to tears with his day job and stuck with a hellish underground commute (I so feel your pain, Peter!) decides to write the great American fantasy novel...on his cellphone! (You think I'm making this up? I am not, sir!) Anyway, this is the first in what promises to be a crack-tastic three-book series. Also? Go read his blog, cos he's a funny guy. Anyone who can write an entire 423-page novel on a cell phone would have be blessed with a sense of humor. And, uh, calluses.

The Steel Remains by Richard K. Morgan (forthcoming January 2009):
Fantasy tropes will get their collective asses kicked and then handed back to them on a platter heaped full of steaming awesome in Morgan's first foray into what Nicola Griffith affectionately calls "sword-swangin' fantasy." 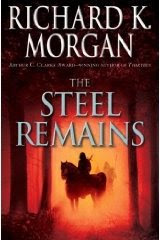 I seriously heart Richard Morgan and have been begging his editor for a copy of this ARC since Hillary Clinton was still a contender. It was finally hand-delivered to me at lunch last week and I subsequently built a little altar to it in my living room.

Cyndere's Midnight by Jeffrey Overstreet (on shelves now; go buy one immediately!): Last year I had the great good fortune to become acquainted with Jeffrey Overstreet's first novel, Auralia's Colors. It went something like this: Michael Palgon, Associate Publisher of Doubleday, hands me a copy of Publishers Weekly with a review circled in red. "This might be up your alley," he says. "Our sister company publishes it." I read the review; it's amazing. I must read this book. Beg Michael to get me a copy of the book. He does. I read it in one sitting. Email Jeffrey to basically say "Holy shit on a shingle, you wrote a great book and what the heck are you doing being published at a Christian publishing house?" 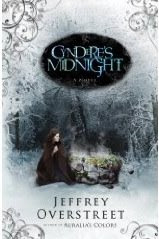 And he writes back, and we have a nice chat about books and faith and publicity and coffee and somehow we end up becoming pals. Turns out? Jeffrey is a prominent Christian film reviewer. Okay, now you're rolling your eyes and I'm about to lose my audience, I can see that but bear with me for moment because I need to say this: Jeffrey's Christianity bears no resemblance to what I tend to call "Jesus Chrispie Crazies" (or what John Scalzi politely refers to as "The Leviticans"). Jeffrey's kind of Christianity is the kind you might actually find the big JC practicing should he ever get around to putting in an appearance at the Second Coming (film at eleven). Ya know, the whole love your neighbor thing? Not all Christians are created equal so no judging. Just cause the haters get all the press doesn't mean everyone with faith supports Fred Phelps. (And, by the way? I'm going to keep waving these damned books at you until you run out to buy multiple copies of them just to shut me the hell up.)
posted by Unknown at 3:03 PM

Now, now, Colleen. Say it with me.

C'mon, use your words.

Good. Good! We shouldn't hate people just because they're a little different than us.

Confirmed: Auralia's Colors is a very good book, and Mr. Overstreet appears to be a very nice man. I'm looking forward to the sequel.

Cellphone books are common in Japan already. They have people whose *career* is to be cellphone novelists.

Ooo -- "Steel Remains" looks good! Thanks for the tip. I've plunked it down on my books to read list!

The book is about a guy who writes a novel on his cell phone?

Happy to say that most Christians are of the Jeffrey type. Sad to me when people think we are all crazies. We're not! We're nice, normal people.

1) I'm Christian. Life-long. Not of the 'reborn' variety.
2) I have a bunch of very close friends who came out of the closet since college whom I would welcome into my church anytime they wanted to come in.
3) I don't freak out about converting people, but if they're curious, I can give 'em the lowdown.
4) If I miss a Sunday at church, I think God will understand. To me, just looking out at the world and being awed by its beauty is enough of a church service for me sometimes.

I wish more people knew that. Unfortunately, I think the whole "turn the other cheek" mantra with normal, loving people who happen to be Christians means that the ones who twist the meaning of the word get all the press and publicity.

In other words, a lot of folks believe that all Christians are crazy because those are the ones we see protesting in front of Planned Parenthood or carry signs that say "God Hates Fags." I wish more of you would stand up and be counted. Maybe we wouldn't keep having our elections hijacked by nutjobs like Sarah Palin. :-)

Thanks for stopping by!

I think I can safely say Colleen is referring only to the crazies, not Christians in general. A Christian myself, I'm frankly quite scared of the sort I grew up with in Southern Virginia: the pastors told me, at the age of 12, that I was going to Hell b/c I believed differently from them; the ones who sent hate mail and death threats (no lie!) to my father who also dared to believe differently from them; the ones who give "true" Christians a bad name. It's sad to me that we do sometimes feel we have to go into hiding b/c of the spread of hate. Having a gay sister who is the best and most decent human being I know has forced me for most of my life to reconsider what it means to judge other people. And I thank God quite literally for that.

Now I need to check out that author's writing.

I wrote a novel in moose blood with an oosik (fossilized walrus penis bone) on Sarah Palin's ego during my eleven hour commute by dog sled.

No, haven't had a chance to start it yet. Just got it last week. Had dinner with his editor tonight who wanted to know what I thought of it. GAHHH! I can't read that fast! I also have three manuscripts that need reading ahead of the Morgan. (Really, I need a vacation just to catch up on real reading.)

But I did read about a hundred pages of an early draft about three years ago, and what I read was quite good.

I LOVE Overstreet. Found him on accident while going through my neighbors shelves looking for new material when I was way to freaking broke to go to the bookstore.