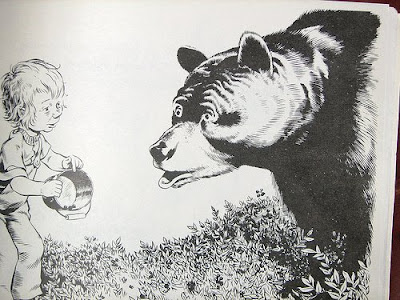 Via Ron Hogan, this hilarious story about a third-grade teacher trying to read the classic childrens book Blueberries for Sal to her class. If you don't remember the story, it involves a confrontation between a small boy and a black bear, both of whom are after the same patch of blueberries. Here's what happened when the teacher asked the class what they thought would happen next:

So what do you think happens next, Mrs. G. asked him brightly.

What do I think? I think Sal is a goner.

Oh, no no no no no, said Mrs. G. quickly, I've read this book hundreds of times. Sal doesn't die. The mother bear is a nice, loving bear.

The kid wasn't having any of it.

I saw a show on the Discovery Channel, he said, bears are unusually aggressive. A mother bear is called a sow, and a sow is very protective of her offspring. A sow will always attack if she thinks she or her cub is being threatened.

To bring it on home, the boy took his finger and slowly slid it across his throat.

And it gets even funnier! Read the whole thing here.
posted by Unknown at 11:13 PM

Email ThisBlogThis!Share to TwitterShare to FacebookShare to Pinterest
tags: dangerous animal stunts, what your kids really want to read

Interestingly, I DO remember Blueberries for Sal, but not having read it since I was 4 or 5, I have been laboring under the delusion that Sal was a girl lo these thirty years.

And to think, I got notes for my parents whenever I pointed out things like that.

My parents got a lot of notes.

I want to be a children's writer now. With carnage.

Wait, Sal is a boy? I totally, totally missed that.

shit, I remember that book, too. We used to read it a lot at my deaf school.

Gahd, that book is probably still in my parents' attic somewhere. I remember my five year-old self not being impressed by it at the time - a little editorial bear carnage would have made it a hit!

I loved this book growing up and just read it (for the 100th time) to my four-year-old boy last night. And Sal IS a girl :-)

Maybe Treadwell read it too. The idiot. He should have watched more Discovery Channel.

Sal is my good friend from college's mother. No joke. Love the book. Sal is a little girl. First sentence is Sal and HER mother... No boy in said story.

Well, not about Sal being a girl, anyway. *snort*

Okay, that was well worth checking out the full original post - hysterical!

"Blueberries and Blood for Sal"

yikes. Times sure do change!

Thanks so much for sharing this...

Blueberries for Sal never really charmed me as a kid. I grew up in a small Alaskan town where bears were a real sometimes-danger, and the story always sounded 100% unlike every real story I'd ever heard about bears. I totally would have been right there with Discovery Channel kid. All apologies to Mrs. G. :)