Guest blogger Joanna Stampfel-Volpe: "Reader's Block or, Stop and Read a Book Once in a While!" 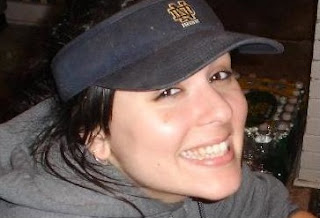 Until very recently, agent Joanna Stampfel-Volpe was a part of the FinePrint family, starting as an intern and later coming aboard as an assistant. Those of us who worked with her could tell one thing straight away: Joanna was a natural born agent. And sure enough, within just a few months, she was taking on - and selling! - clients of her own (including a fascinating forthcoming book by Ben Hewitt on sustainability and how the organic food industry saved a small town in Vermont). At the end of 2008, Joanna moved over to work as a full-time agent with our colleague Nancy Coffey, at Nancy Coffey Literary & Media Representation. Although we were sad to see her leave FinePrint, we're happy that we didn't lose her entirely; Nancy Coffey shares a suite of offices with FinePrint, so Joanna's only moved about fifteen feet away!

I frequently have editors and writers guest-blog here, but I've never asked another agent to talk about what it's like on the other side of the desk. Joanna kindly agreed to share her perspective on a frustration that most agents experience at one time or another:

Over the holiday break, I found myself with reader's block. For all of you writers out there who just did a double-take, yes, I said readers block. I just made it up. Although I’m positive I’m not the first person in the industry to feel this way. Let me explain.

I was on the couch, reading a requested submission and I just couldn’t get past the first page. And the writing was good. After four failed attempts I put the manuscript aside and picked up another. Same thing happened.

The next few days passed with the same results. I was frustrated (for those of you who don’t know me, this is an understatement to say the least). At one point I’m pretty sure I injured my dog with an errant rubber band flick. I unbent every paperclip in sight. I even did—gulp—all of our laundry, including bed sheets! But still, the thought of attempting another manuscript made my eyes cross.

“I think I’ve burned out,” I announced to my husband, Joe. He didn’t even get a chance to step inside our apartment yet. “I just can’t read anymore.”

Joe peered over my shoulder at the mess of paperwork on the couch, the pile of metal sticks on the coffee table, and at PeeWee, who gingerly licked at his rubber band wounds. “Let’s talk about it.”

Ah, the benefits of being a newlywed.

Joe dropped his briefcase, carefully moved a pile of papers labeled “client edits,” and sat on the couch. “So what have you read lately?”

“What have I read?!” Did he really want to get me started? “Oh, I don’t know…about a hundred queries, a manuscript about a leprechaun with a Napoleonic complex, Client X’s latest revisions…” blah, blah, blah.

Joe’s a good sport. He let me rant for at least three minutes.

“That’s nice,” he finally said. “But what books have you read?”

I stopped pacing. Wait…what was the last book I read?

Joe was quiet for a minute. Then he stood up, walked over to our bookshelves and pulled out the newest Dennis L. McKiernan (I’m a closet Mithgar junkie and he knows it). I had bought the book as soon as it came out in October. I meant to read it...when I had the time….

I followed Joe down the hall and into our bedroom.

“Now lie down and read.”

Had he even been listening to me?!! “I can’t read!” At this point I was near tears. I mean, before this I could always read. No matter where I was, I could always get sucked into a new world. And now that magic was GONE.

Being the other newlywed, I relented. I swiped the book from his hand and made myself cozy.

It took a few minutes, and a few bouts of actually forcing myself to sloooooow down. But it worked. The words pulled me in, one by one. I connected with the characters (Aravan, my love!). It was just like old times.

I stopped—reluctantly—to eat dinner and to feed PeeWee, who forgave me for my earlier actions as soon as his kibble hit his bowl. By the time Joe climbed into bed, I was more than half way done. At 3:42 a.m., I closed the back cover over, fully satisfied.

Only I wasn’t satisfied. After I turned out the light, the story kept replaying in my mind. I wanted more. What happens to the characters now? Oh, I hope Dennis (isn’t it great how you’re on a first-name-basis with an author when you read their work?) writes another soon….

This is what I had been missing.

The next morning I had errands to run, we had plans that evening, and I needed to shower, but something kept pulling me to my pile of submissions. I wanted to meet new characters, to go on new adventures. Dennis’ book left me wanting more. And that’s really what good writing does.

That’s when I realized what Joe was trying to tell me. There was nothing wrong with the manuscripts or the writing or even the queries. I just needed something to remind me what all of those submitted pages could become. I needed a reminder of why I joined this industry, why I even became a reader in the first place.

Nothing beats a good book.

I once heard that Stephen King reads for four hours and day and writes for four hours a day. Now, it’s true that Stephen King could attribute his success to scrambled eggs and beer for breakfast and we would probably all take his advice, but I think he has something there on the reading part. It’s our way, as persons in the publishing industry, of smelling the roses.

Joe came home early from work that night for our evening plans. He found me on the couch, PeeWee curled up next to me, a manuscript on my lap and ...unshowered. But he didn’t get mad. Ah, newlyweds!

You can learn more about what Joanna's looking for at her Publishers Marketplace site. Additionally, she says:

What I'm dying to find is a good, dark teen read for boys. Think Stand By Me meets Catcher in the Rye, but with a more modern voice. For girls, I would love to see a gothic romance for teens...if someone could pull it off. As for adult work I'd really like to find an urban fantasy with a strong, female lead. All of that being said, voice is what matters most, so if the voice and writing are spot on, it doesn't matter what it's about, I'll definitely be giving it a second look.

I consider reading to be part of my job as a writer. I have to include audio books in the material I "read" because of time constraints, but it's vital to continually take in the published words of others.
I can see how this would be the same for agents too.

This is hilarious but oh so TRUE! Even as a writer I've noticed that reading = more writing.

So true! I think when my reading time suffers, my writing suffers. I loved this post and Joanna sounds like a fabulous agent.

Congratulations on your move!

And writers have the same problem. If you forget to read too long, the well dries up, and everything sounds WRONG. It's critical to keep yourself thinking and losing the outside world!

Thanks for the well-wishes! And your post on Travis Erwin was devastating--I sent a contribution today! Everyone else out there, please read Susan's blog post about the fire and help out!!!

Congratulations, Joanna. You two are on your way to long and happy nuptialing!

Your JENNA ROCKS sign just made my whole day. Thanks!

And the collection for Travis is going really well. Thanks to everyone who's helped!

Thanks for the insight, Joanna. Since one of my best cures for writing block is reading a "fun" book, I'd imagine the same goes for reading block too. Especially when you hadn't read anything published since Thanksgiving! Poor thing--good thing you have a husband looking out for you.

Dang. She can write too. Her dialog is spot-on. Maybe she should write novels in her spare time. (snigger)

I have a question for Joanna. You said you're looking for "gothic" romance. What does that include? Is it just a specific time period? A certain "feel" to the novel? A particular location? Gothic can mean different things, so I'm wondering what you mean when you say it.

Think Lord Byron...just kidding. But not really. I guess I'm looking for a period piece that fits the gothic fiction formula: governess, single type-a male, throw in a haunting or two, a jealous suitor, a villian, and possibly a strong child character with a traumatic past...okay, now I'm getting carried away. Of course the romance has to be age appropriate, but YA readers can handle some steamy scenes I think...
I hope that helps? I'd really rather see what writers come up with, because if I've learned one thing it's that writers are waaaay more creative than I am.

That does help! Thanks so much. So with the governess thing, I suppose that'll be the 18th or 19th centuries, and not the middle ages, right?

Oh! I didn't mean governesses in the Middle Ages, if that's what you thought. Just stories set during that time.

Hey Jo, you're going to make a brilliant agent.

The writers who get your attention will be lucky indeed.

Good luck with it!

It's not quite ready for an agent's eyes at the moment. The instant it is, you're at the top of my list!

Hmmm. I queried FinePrint because I was awestruck by Peter Rubie at last year's Ninc conference. Then I had a great exchange with Joanna about one of my manuscripts,and she said query again. What to do?!

(After finishing the manuscript, that is...)

My fingers and toes are still crossed for you, and I've even taken to braiding my hair.

Seriously, both agencies are wonderful, it's up to you.

You were too a help! Kind, insightful agents are always appreciated by neurotic, validation-seeking writers...

I never did get the goblins right, so they're under the bed. Writing boys YA spies this time around. Planning to harass you again soon.

So glad things are going so well for you. (And I'm familiar with your new agency. Have a friend who is a very happy client.)

So...if you and Joe need a dogsitter, I'm totally putting my name in for consideration.

Woo-hoo! I knew you were born for this path! You're so good at it.

I know you'll be absolutely awesome, not to mention that you are with the best (Nancy Coffey). I'm sure there are a lot of happy writers out there, knowing that you have become a full-timer.

I look forward to all of the huge success that will be associated with your name and guidance.

Congratulations on the move and the nuptials!