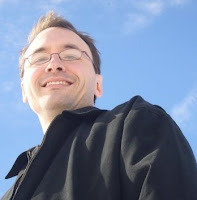 Since so many of you out there writing novels or hoping to write novels usually start out by writing and selling short fiction - particularly those of you who write genre or literary fiction - I thought I'd invite someone who is best known for his short fiction to be my next guest blogger here at The Swivet, my good friend Matthew Cheney.

I first met Matt as I have met so many great people in the book industry: virtually. In 2003, I was working at Del Rey and - as always - was trying to find new and non-traditional venues for promoting writers like China Mieville and Alex Irvine. More and more often I found myself turning to then-fledgling network of literary bloggers, critics who tended to embrace anything that was good writing without holding the fact that it was genre writing against it. I came across Matt's wonderful literary blog, The Mumpsimus and discovered someone who was writing elegantly about genre fiction, blending the passion of a true fanboy with the critical eye of a literary theorist. (Of course I started bombarding him with books immediately and he still blames me for the roughly four thousand review copies he gets in his mailbox every week.) It was only afterward that I discovered Matt also wrote fiction himself; indeed, that he was a wonderful - and prolific - short story writer whose work was widely-published and well-respected in the industry.

This past Saturday, Matt and I got into a conversation online about a wonderful post that agent Nathan Bransford wrote last week about MFAs and their shortcomings in preparing writers to actually become published writers. Tomorrow's post by Matt is a direct response and a great addendum to that post.

More about Matt, in his own words (because I made him write this last night at midnight!):

Born under a rock, where I was left to fester until discovered by roaming Jewish Mormon Indians of French descent, who stuck me on the Mayflower and hoped I'd teach some Puritans a thing or two. I didn't.

Actually, the above is a lie. I'm sorry.

I'm not related to Dick Cheney. Or, rather, I asked my father about this, and he said that sometime in the 18th century, the family split into two strands: the successful strand of doctors, lawyers, and politicians; and us. Big Uncle Dick came from the successful strand.

I grew up in a gun shop in central New Hampshire. I fled at age 18 to NYU to study Dramatic Writing at the Tisch School of the Arts, because I wanted to be a playwright. I left after 3 years, disillusioned and bitter, to finish up at the University of New Hampshire with a B.A. in English, though, being burnt out, I avoided all writing classes there.

After graduating from UNH, I taught English at the New Hampton School for 9 years and also became the Director of Performing Arts, because nobody else was crazy enough to do the job. I got a sabbatical year at New Hampton and used it to do the class work in the Master of Arts in Liberal Studies program at Dartmouth College, where I wrote my thesis on the early writings of Samuel Delany. In 2007, left New Hampshire to teach at the Frisch School in New Jersey, but returned home a few months ago after the death of my father. I'm now selling off his business and teaching at Plymouth State University.

I'll probably be in New Hampshire for a while, because every time I leave it does something to make me have to return.

Past publications include work in English Journal, One Story, Failbetter, Las Vegas Weekly, Locus, Web Conjunctions, Rain Taxi, Lady Churchill's Rosebud Wristlet, SF Site, Pindeldyboz, Abyss & Apex, Ideomancer, the Internet Review of Science Fiction, the anthologies Logorrhea and Interfictions, etc. I also write a column for Strange Horizons and am the series editor for Best American Fantasy (Prime Books). Upcoming work includes stories scheduled to be published by Weird Tales and in an anthology edited by Paul Jessup, as well as introductions to reissued editions of Samuel Delany's The Jewel-Hinged Jaw and Starboard Wine from Wesleyan University Press. And I probably still owe somebody a review of something...

I was nominated for a World Fantasy Award in 2005 for The Mumpsimus, and my story "Blood" from One Story was listed in Best American Short Stories (Stephen King, ed), Best American Mystery Stories (Carl Hiaasen, ed.), and The Pushcart Prize as one of the stories they almost included in the book, but God told them not to.

You can read a wonderful interview with Matt here,and sample some of his published short fiction here, here, here, and here. You should all be regularly reading his blog The Mumpsimus as well. And, lastly, you can read a loving tribute that Matt wrote about his [recently-deceased] father over at Strange Horizons here.

Stay tuned for tomorrow's column.
posted by clindsay at 11:45 AM

"I'll probably be in New Hampshire for a while, because every time I leave it does something to make me have to return."