When we remember that Tuesday...
Here is New York: A Democracy of Photographs

The city, for the first time in its long history, is destructible. A single flight of planes no bigger than a wedge of geese can quickly end this island fantasy, burn the towers, crumble the bridges, turn the underground passages into lethal chambers, cremate the millions. The intimation of mortality is part of New York now; in the sounds of jets overhead, in the black headlines of the latest editions.

All dwellers in cities must live with the stubborn fact of annihilation; in New York the fact is somewhat more concentrated because of the concentration of the city itself, and because, of all targets, New York has a certain clear priority. In the mind of whatever perverted dreamer might loose the lightning, New York must hold a steady, irresistible charm.
-- E.B. White, Here is New York (1948) 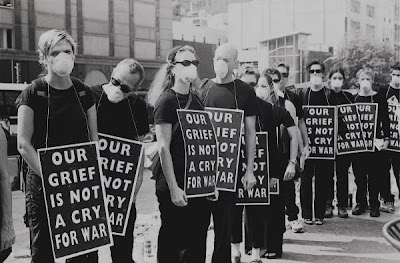 Shortly after the awful events of what some of us now simply call "that Tuesday," a small gallery on Prince Street in SoHo opened up its doors and began to invite ordinary New Yorkers to contribute their photographic memories of that day. What first began as a small community art project soon blossomed into an amazing historical document of one of the worst days in American history, a physical - and virtual - library of images captured by ordinary people on an extraordinary day.

The gallery space soon began to draw crowds and groups of people queued up for hours to get inside to look at the photos. It was almost as though it became a necessary pilgrimage; to see what others had seen, to be able to compare the experiences of these strangers with the events that had shaken your own world, to compare, to confirm that yes - this thing really had happened. 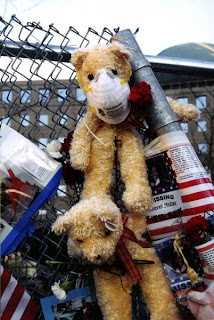 And the mixture of the people who stood on line was just as amazing. German tourists standing next to dust-covered firefighters who were using their precious free time to witness this unusual grassroots outreach, before turning around and climbing back atop the pile of rubble twelve blocks to the south. Weary Red Cross workers on their way to pick up supplies. Groups of young children with their teachers. A band of Buddhist nuns who stood and prayed outside the gallery for hours. Actors. Stock-brokers. Janitors. Chefs. Homeless men and women. All standing together to witness one another's memories.

The exhibit ran through the beginning of 2002. The gallery began printing and selling the photos, donating all proceeds to the Children's Aid Society. By Christmas Eve, the gallery had sold more than 30,000 prints. A book was produced. Eventually a comprehensive website was created, where every photograph was archived and made available to the public. A video archive of oral histories joined the photographic archive online. The original exhibit toured the United States for nearly a year.

This project - called Here is New York: A Democracy of Photographs - is still available online in its entirety.


And it is, frankly, one of the greatest visual arguments against ever making war on other human beings that I have ever seen. 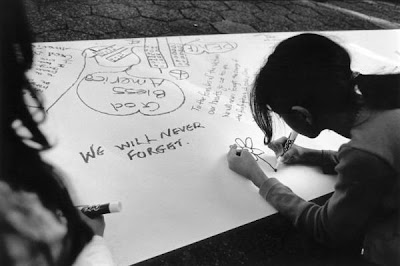 Thank you for posting.

Still so hard to believe that humans can be filled with so much hate.

I haven't thought of this memorial and the people in these photos since I was a young museum studies student at an upstate New York college. This book is an amazing tribute to their loss and grief.

On a side note, our class was amazed at the amount of people who thought it was in bad taste for professional artists to be producing 9-11 inspired work so soon after. "How can you make art at a time like this?" was the argument.

How can you not?

Thank you for this.

This was a good post. I haven't seen as many posts as I thought I would.

I went.
I saw.
I remembered.
I cried.