Closed to queries for the month of June!

Just a heads up that I am closed to queries for the entire month of June. As of midnight this tonight (EST), all queries received will be deleted unread.
posted by Unknown at 6:39 PM links to this post 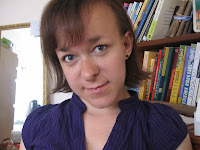 My pal Roseanne Wells is a new agent at the Marianne Strong Literary Agency. An avid reader since forever, she discovered her passion for book publishing during her internship at W.W. Norton and hasn't looked back. She is also an arts reviewer for PlayShakespeare.com and loves dance, food, and awesome people. I asked Roseanne to talk a little bit about the dreaded "kitchen sink plot", a device that every new writer uses at one time or another to try to write themselves out of a plot hole or a bad book. Here are her thoughts:

My friend Jane* has a tendency to tell really boring stories. She inflicts you-had-to-be-there stories, I-find-this-to-be-funny-but-you-might-not stories, and this-is-interesting-but-not-well-told stories on us all the time.

In college Jane started noticing that when she was telling a story, people started picking their nails, looking past her for the nearest exit, or falling asleep on the spot. Even when she could feel that the story was dying a soporific, painful death, Jane couldn't stop herself -- she felt she had to finish it to the end. She so desperately wanted her stories to work that she grasped for something that could save them, any lifesaver that could bring them home. Jane peaked when she was telling a story and, just as my eyelids began to flutter, she blurted out: "And then there was a dragon!"

Don't do this in your manuscript.

Just like a band aid will not patch a broken arm, a drop-in device can't mend a disjointed plot, polish a character, or create strong conflict. And sometimes, even a tourniquet can't save it: the whole arm has to go.

The key is to see what wasn't working before the dragon was needed. Are there two characters that need to meet, but there's no real bridge between them? Is there a romantic subplot that isn't taking off? Are the stakes not high enough for the reader to care?

I find that dragons and the like often appear when writers feel they're out of options, that too many parts that are fixed in stone, and they have to come up with a magic fix-it-all to glue the pieces together.

But nothing is as static as it may seem, even when you feel that your manuscript is ready to give to a peer, agent, or editor. Don't be afraid to change or cut for the benefit of the whole story, even if it's only temporary. (I often remove what may be a dragon in disguise and put it in a separate document; if I do end up needing it later, it's sitting there, ready to come back to work.)

Dragons are awesome, but they can't make Aunt Millie more interesting than you've written her.

*Name changed to protect the boring.

If you're looking to submit to Roseanne, she's looking for strong literary fiction, YA, sci-fi (most subgenres included), fantasy, and mysteries (more Sherlock Holmes than cozy mysteries). Her nonfiction interests include narrative nonfiction, science (popular or trade, not academic), humor, history, true crime, religion, travel, food/cooking, and similar subjects. Query letters can be sent by email (with no attachments!) to queries(at)stronglit(dot)com.
posted by Unknown at 3:53 PM 19 comments: links to this post